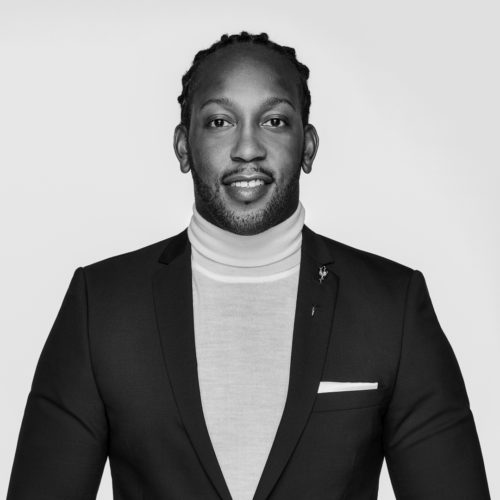 Tyrone Edwards is a reporter for nightly entertainment show Etalk and the host of DNA Dinners, which was nominated for a 2019 Content Innovation Award (Cannes, France). Tyrone also weighs in as a fashion expert on Celebrity Style Story. In high school, Tyrone travelled to the U.S. to play basketball at Randallstown High School in Baltimore, MD. From there, a scholarship presented him with the opportunity to attend Hillsdale College in Michigan, where he played NCAA basketball while studying Business. In 2007 he moved back to his home city helped create the love letter to Toronto that is the 1LoveTO blog, a project that ultimately led him to join Much Music in 2011. Joining the Much team led him to host shows and events such as RapCity, the iheartRadio MMVAs, Golden Globes, MTV Movie Awards, and TSN 6ix Degrees. Off screen, Tyrone is involved in his community, acting as a mentor and voice for underprivileged youth. He currently partners with the Yorktown Family Services Mental Health Walk-In Clinic. Tyrone’s previous community initiatives include co-founding the not-for-profit basketball camp Concrete Hoops, and leading the Business Program at Toronto’s Remix Project, an organization helping underserved youth learn the fundamentals of the arts and entertainment business, and assists them in their educational and entrepreneurial aspirations. Tyrone is the recipient of the 2016 Mandela Legacy Hope, Success, and Empowerment Award, alongside Naomi Campbell, and Reverend Al Sharpton.

Toronto is not a melting pot and our cultural enclaves are living proof. The product of the Toronto experience creates individuals that are culturally informed and cultural exchange is innate. The character of our city is found beneath the skyline amongst the people who represent every corner of the world – The World in 1 city. Currently we have policies in place to protect our heritage buildings and with the momentum of Toronto rising daily, it is imperative that we also think ahead to protect our culture, our artists & the beautiful diversity that makes this city what it is, One Love.